Tuesday night, the TAMIO Board of Directors honored Tom Bryson with the organization’s prestigious Cheryl A. Soward Communicator of Distinction Award for his more than 30 years of service and leadership to government communication.

The Board originally planned to present this at TAMIO’s 2020 conference in Arlington, but coronavirus had a different plan. So, instead, the award was presented at Tom’s last city council meeting. The change was fortuitous, as the entire Farmers Branch City Council and many of his colleagues were able to see the impact Tom has had on government communication that has reached far beyond the city limits. 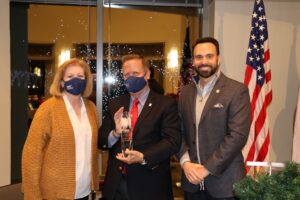 Like so many of us, Tom started his career in journalism covering local news and city government in northeast Louisiana, east Texas, and the Dallas-Fort Worth area. After six years as a reporter, he made the transition to municipal communication, starting in Duncanville before moving a little north to Farmers Branch in 1999.

As the director of communication in Farmers Branch for 21 years, Tom led a team of two, which meant he had his hand in all aspects of the operation, including: the City’s internet presence, launching its social media, media relations, email propagation, announcer, special events/projects, and video production.

Tom’s vision and creativity can be seen throughout his city’s communication. His innovations were often on the leading edge of public communication and resulted in more than 60 TAMIO and City-County Communications & Marketing Association (3CMA) awards for outstanding work in our field.

While Tom’s contributions to Farmers Branch were impactful, it is his work at the state and national level that may leave an even greater legacy. He is a longtime member of both TAMIO and 3CMA, where he has dedicated years of service on their boards, culminating with his election as president of both associations. Tom’s work with the TAMIO Board came at a particularly critical time for the organization, and he can be credited with helping TAMIO grow both its membership and its programming.

Many of you are graduates of the Texas Christian University’s (TCU’s) Certified Public Communicator (CPC) Program, an endeavor that started with a small group of visionaries including Tom Bryson. He was a founding member of the CPC Advisory Board, a member of its first graduating cohort, and is still a member of its faculty. This idea for CPC that started back in 2012, has now grown into a national certification program for public communicators and it’s making a huge difference in government communication, literally changing the game for our profession.

All of this sounds lofty (and it is), but I think what I’ll remember most about Tom’s tenure with TAMIO and Farmers Branch is his humility. No job was ever too small or unimportant. In fact, my first introduction to Tom was at the 2013 TAMIO conference in College Station. I walked into the room behind registration with just two weeks under my belt as a municipal communicator. The first person to greet me was Tom Bryson, who was busy folding T-shirts and creating speaker gift bags. He couldn’t have been more welcoming or friendly. That roll-up your sleeves and get the job done mentality is a Tom Bryson hallmark.

The Cheryl A. Soward Communicator of Distinction Award is the highest honor TAMIO bestows. It’s designed to honor the best and brightest in the field of government communications. Many of us never got the opportunity to meet Cheryl, who was a television reporter and anchor before moving to public communication as the director of public information for Corpus Christi in 2002. In a relatively short municipal government career, she amassed a wealth of expertise through membership and participation in TAMIO and 3CMA. Cheryl was a member of the TAMIO Board when she lost her battle with leukemia in 2006. The Cheryl A. Soward Communicator of Distinction Award was created to remember and honor Cheryl’s life and career and to encourage the level of participation, education, networking, and enthusiasm for her profession that she brought to her membership in TAMIO.

This isn’t an annual award. In fact, it is only given when someone is identified as upholding the ideals of Cheryl Soward 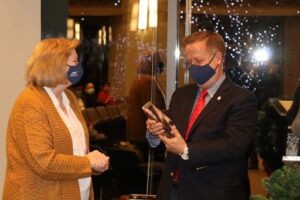 and her commitment to municipal communication. Over the last decade, there have only been four other recipients: Sharon Logan from Coppell, Drs. Jacque Lambiase and Laura Bright who started the CPC program at TCU, and last year’s recipient, Belinda Willis from Mansfield. The TAMIO Board is delighted to add Tom Bryson to that list of distinguished Texas communicators. A dedicated public servant, innovator in communication, and mentor to many, Tom has created an enduring legacy during his 30 years in public communication.

Tom’s retirement will begin January 4. He and his wife plan to spend a lot of time in Florida with their son, Taylor, and visiting their happy place: Disney World. Tom, you’ve earned it! Please join me in congratulating Tom on his retirement. You’ll be missed.